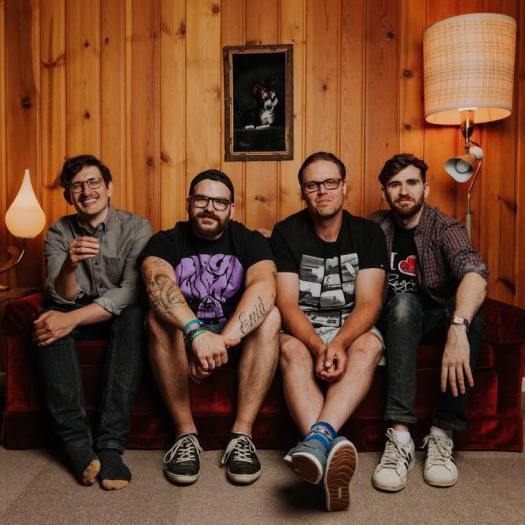 I’ve been slacking on updating my blog, so I’ve decided to kick myself in the butt and start an ongoing project by shining the spotlight on local musicians. Nick Faye was a good sport and has graciously become my first guinea pig. The concept is simple: 5 questions and 5 answers. Q & Eh. Clever title, hey? I thought so.

Nick Faye has been a staple in the Regina music scene for the last few years. Originally starting off as primarily a singer/songwriter, Faye has evolved into a full-fledged band leader with Nick Faye & The Deputies. Their brand of melodic rock is mixed with a nice dose of folk and roots.

Faye and the gents are about to release their fantastic new album Stumbling Distance, available April 14. To mark the occasion they are playing an album release show April 14 at The Exchange. Andino Suns are the openers.

For a taste of what the band has in store, check out their new video for first single “Hold Me Back.”

Q: Stumbling Distance was produced by Michael Phillip Wojoweda (Spirit of the West, Rheostatics, Barenaked Ladies). What was it like working with someone behind the board of some of Canada’s most seminal albums?

Eh: It was really cool. We did a lot of pre-production work via Skype where we solidified the album concept, and he picked apart our early versions of our songs. We had never really had anyone do that before, and so it pushed us out of our comfort zone and forced us to re-evaluate songs that had become ultra familiar. It definitely helped push the songs to the new level, and we spent a few evenings in our basement once he came to Regina getting the right “vibe” or “feel” in each song before hitting the studio.

In the studio, Michael was a wizard at finding amazing tone and working with us to find interesting production bits and flourishes to keep things sonically interesting. He totally understood the vibe we were going for, our strengths that we had to work with, and managed to guide the album to its final product. It’s a little nerve-wracking to work with a big name producer when you don’t really know them, but he really did understand us and it helped us to take our songs and sound that we already had to a new level. He helped us go deeper and deliver a really interesting record with a lot of depth.

Eh: Heyohhh! We’ve been putting horns on our album since the first full band release in 2011. Horns and pedal steel have kind of become a cool staple of our recorded works. The last few releases we’ve been fortunate to have member of Bears in Hazenmore lend their time and talent to our albums, and they helped out again! It was a little different because by the time they got in the studio, the songs had changed and been produced so differently that a lot of their lines that they developed were ultra similar to keyboard organ lines that we had recorded. Michael really put them on the spot, and Dana, Dalton, and Brady responded with a real mature level of professionalism. Those guys are amazing musicians and songwriters, and I can’t wait for Bears In Hazenmore’s new record!

Q: One of my favourite memories of the 2016 Regina Folk Festival was during the finale when you did a killer rendition of Eagle Eye Cherry’s “Save Tonight” with Megan Nash and Eric Taylor. How did that come about?

Eh: Hahahaha… Oh man… We had actually spent HOURS jamming in a parkade preparing to sing a really beautiful rendition of “Harvest Moon” after The Mavericks. We were nervously pacing backstage, when The Mavericks played “Harvest Moon” as their second last song. We were so screwed and had honestly like 5 minutes to prep something new. After 2 minutes of stressing and wondering if we could just play the same song again (obviously you can’t because the Mavericks version was SO GOOD), we hastily decided to play “Save Tonight” out of sheer panic. We were all so rattled, and honestly couldn’t process what just happened. Haha. Great story.

Q: What’s your tour/show plans this spring and summer?

Eh: We’ll be hard at work touring in AB/SK over April and May and we’ll be heading out to Halifax and back in June, but we’ll be announcing stuff soon! Gonna be so fun to hit the road! We’re pumped to have a number of awesome musicians like Landon Leibel (Laska, Trash Hawks, Tiger Charmer), Andy Beisel (Wolf Willow, The Steves, The Gates of Dawn), and Matt Fraser (Orbital Express, Kelevra) fill in for various parts of the tours. It’s actually our FIRST TIME ever touring as a band, which is super exciting. Usually I just do solo acoustic tours.